The Alvin Ailey American Dance Theater Barbie has pointed toe feet, so very few Barbie shoes fit. I decided to try making shoes for her, although Barbie feet are a bit too small to my taste.

The first step was to make the insoles out of cardboard. As you can see here, I made a toe part for the sole, although it would be left empty. The shoes need to have closed toe to disguise this. 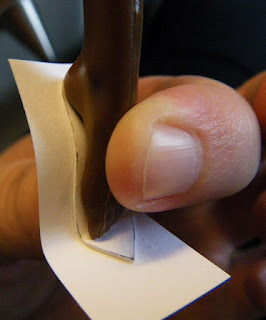 Next, I glued pieces of leather there, so the toe part would keep its form. 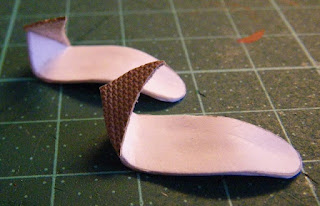 Here you can see the pieces in place. I could have printed the texts directly to the cardboard I used for insoles as it would have been neater than gluing separate texts in place, but as this was the first try, I didn't bother. 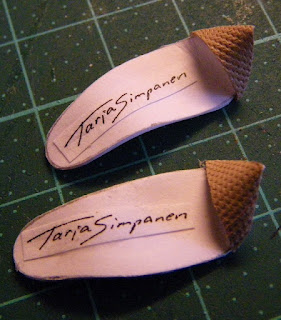 I used narrow strips of decorative band for the uppers. Using several narrow strips helps getting the correct form as they can overlap, if needed. 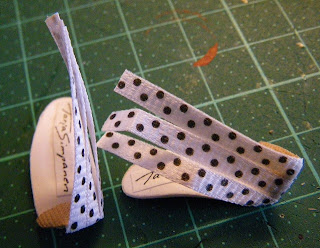 Here one half of the upper is ready and the other needs to be glued in place next. 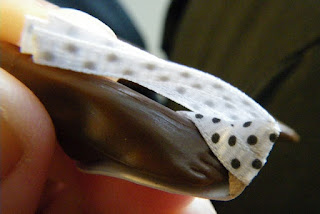 I made the ankle straps using rubber bands the same way I used them for Barbie shoes once before. 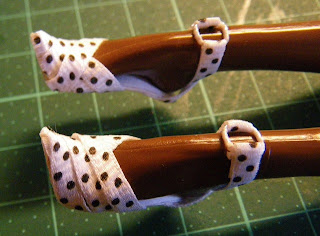 Here are the finished shoes from front and side. The heels are made of round pieces of wood cut to a 45 degree angle on the other end and painted white. The outer soles are made of leather. 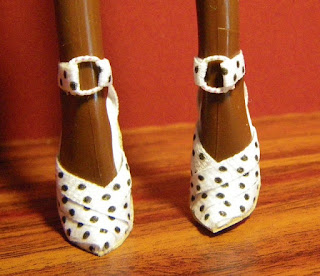 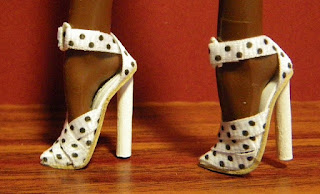 I'm not quite happy with the result, but for a first try, it is good enough. Also, I learned a few things that should be done a bit differently, so I will probably try another pair at a later date.

Email ThisBlogThis!Share to TwitterShare to FacebookShare to Pinterest
Labels: barbie, rubber band, stiletto
Newer Posts Older Posts Home
Subscribe to: Posts (Atom)
Any Amazon links in this blog are my Amazon referral links and as an Amazon associate I earn from qualifying purchases.