Making a master for a mould

I'm still making resin castings as 500 ml of resin is a lot for casting such small pieces. Finding out that latex moulds can be used with resin was really great, because I can make moulds for casting just one pair. You can't really use a special design, like the one for Monster High Nefera in the picture below, for a lot of shoes. 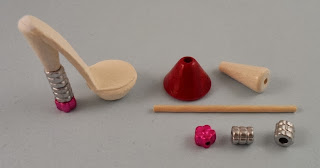 As you can see, the parts used for the master are really simple, just wooden and plastic beads, a round wooden stick (for keeping the heel parts together) and card stock. The main things are that the master lasts long enough to make the mould and that there are no openings between the parts for latex to get into (two coats of sealer will take care of that).

In the next picture, the master is attached to a base with clear mounting tape and two coats of sealer have been applied. This is for making the latex mould, which has been described in previous posts. 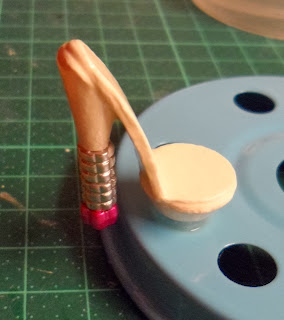 Here you can see the finished mould and the pair of castings. The part of the mould between the heel and sole needed to be cut a bit to remove the castings and turn the mould. Those parts of the sole were so close to each other that too much latex collected there when making the mould.

I also made a couple of pairs of soles for Miss Piggy. The masters for both designs were made of card stock (sole) and wood (heel). The Barbie wedge sole is included to show the scale.

With such a long and thin sole, it was necessary to have some extra support during the casting process. I removed the heel from the master and used the curved sole under the latex mould to ensure that the mould would keep the correct shape.

I got Monster High Catty Noir and seeing her boots got me thinking that I might be able to copy them. The boots consist of two halves, which should make it possible to make tubular latex moulds for them. 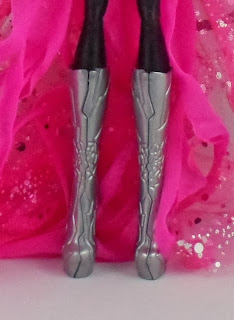 I attached the parts to small pieces of cardboard covered with packing tape. I used clear mounting tape to attach the pieces from the toe parts and them applied a few coats of latex. I had to make moulds for all four parts, because the two halves of one boot were different and the corresponding parts for the other boot were mirror images of those. 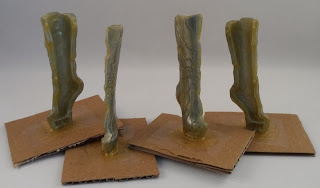 Here are two of the finished moulds. I was a bit worried that the holes wouldn't be big enough to get the pieces out of the moulds, but latex stretches quite a lot, so the moulds were usable. 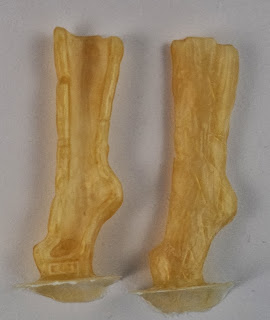 Here you can see the size of the holes. The biggest problem with them came when pouring resin into the moulds as it would easily spill outside the mould. 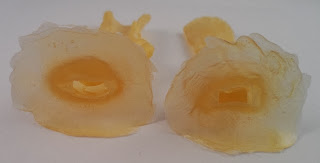 Making the castings wasn't as straight forward as I had thought, because hanging the moulds vertically caused the moulds to deform as resin collected to the bottom. I had to fill the moulds half full first and place them almost horizontally so they would keep their form. Then when the resin had hardered a bit, I could pour in the rest and keep the moulds upright to keep the resin from spilling out.

Here you can see the original pair and the resin castings. The castings aren't quite successful as the seam in front won't close properly, but the result is still better than I expected. I'll just need to figure out a way to fix the front. 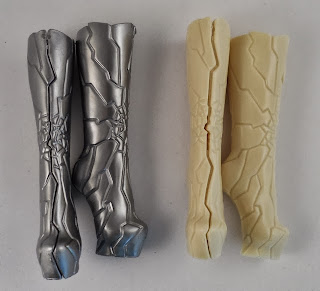 Email ThisBlogThis!Share to TwitterShare to FacebookShare to Pinterest
Labels: boots, casting resin, latex, monster high doll
Newer Posts Older Posts Home
Subscribe to: Posts (Atom)
Any Amazon links in this blog are my Amazon referral links and as an Amazon associate I earn from qualifying purchases.